The concept of acquiring new customers at a breakeven or slight loss sounds crazy to some people, writes Robert Clay of Marketing Wizdom. Why would you even want to do it? After all, staying in business requires you to make a profit on every sale … or does it?

Acquiring new customers at a breakeven or slight loss, in the right circumstances, can be an extremely cost- and time-effective way of achieving substantial business growth. It is also one of the most overlooked and under-used methods of business growth available to you.

While this strategy shouldn’t be used by businesses that make one-off or infrequent sales, it can come into its own if a substantial portion of your sales and profits occur when your clients return to make repeat purchases from you over months, years or decades.

Simply put, you won’t start to benefit from any of that profitable repeat business unless you first get people to make their initial buying decision.

Get new customers started sooner rather than later

The idea then is to get as many prospects as possible into your buying stream as quickly and easily as you can, even if the initial sale is made at breakeven or a slight loss. The sooner you can get people to make that initial buying decision, the sooner you will start to benefit from all the repeat business, add-ons, referrals, and ancillary products and services that represent the bulk of your profits. And that’s where this strategy starts to make sense.

To make this strategy work you need to make it as easy and irresistible as possible for your customers to start doing business with you. Many companies have been catapulted from obscurity to market leadership as a result.

Here’s an example that illustrates how a struggling startup company used this strategy to run rings around huge established competitors, overcoming massive odds to became a giant in its own right in the corporate world.

That startup was AOL, and back in the mid-’90s it’s CEO, Steve Case, faced overwhelming competition in the race to dominate the internet. His competitors at that time were the likes of CompuServe and Prodigy who were owned by wealthy corporate giants like Sears, IBM and H&R Block. They could have obliterated AOL at will had AOL even been on their radar.

Prodigy spent $500 million launching their online service. They were selling their software through 500 Sears stores for $39.95 and charged $9.95 a month for their service. They were also spending $20 million a year on advertising, and had signed up 500,000 subscribers. The other big player, CompuServe, had around a million subscribers at the time and were the world’s largest online service providers.

There was seemingly no way that AOL—which by this time had 300,000 subscribers, annual revenues of $40M, and needed more investors—could compete with these big spending giants.

That was when Steve Case decided to shift AOL’s focus away from trying to make a profit on the acquisition of new customers, and instead decided to make their real profit on all the repeat purchases that resulted from those new customers.

His strategy was to unleash the fury of millions and millions of AOL computer disks on an unsuspecting world. These disks allowed you to install AOL’s software on your computer free of charge and you could also connect to AOL for a month free of charge.

AOL initially just wanted to discover how many people would use the disks to log on and become paying subscribers if they gave them away. They spent $250,000 distributing the disks as computer magazine cover disks in a sealed plastic bag. They found that for every 100 disks they gave away, 10 people became paying subscribers. With that kind of response they could easily afford to distribute more and more disks … until the disks were being distributed everywhere.

Before this strategy was unleashed AOL’s giant competitors didn’t even think it was a serious contender. It was beneath their radar … and they certainly didn’t see what was coming.

When Steve Case pushed his marketing button in January 1994, AOL gained 70,000 new customers the same month. Eight months later it had signed on more than a million, and over the next few years this number grew to 33 million.

Within two years of implementing this strategy AOL’s revenues had grown from $40 million a year to $298 million a MONTH! And this, remember, was from a company that wasn’t even taken seriously by its competitors.

The strategy was so successful that AOL were overwhelmed for the next twelve months and had to fix a range of customer service issues to ensure that its rapidly increasing body of customers could even get online when they wanted to. It was a struggle to keep up, but they eventually fixed the problems because they had all this new cash rolling in each month.

Had you been been working at Compuserve or Prodigy when this strategy was unleashed, you’d have thought that AOL had gone nuts. These companies had spent fortunes trying to persuade you to buy their software so that you could spend still more money using their services, whereas AOL just said “Just stick this disk into your computer and try it. You’ll get free email and the first month’s usage for free. You can go to a computer store and buy a competitor’s program for $39.95 or you can have AOL for free, which will you take?”

This strategy didn’t just result in an expansion of the online market, it resulted in an explosion, and AOL quickly took the lion’s share of the market. As its subscriber base grew, it freely stole customers from its competitors and eventually absorbed Compuserve. Prodigy disappeared and within a few years and AOL became powerful enough to gobble up Time Warner, creating the world’s largest media company.

While the AOL Time Warner merger turned out to be one of the worst mergers in corporate history, the fact that it happened at all is testimony to the power of this strategy. So it really wasn’t a crazy strategy after all.

Book, CD and DVD clubs have used the same strategy successfully since the 1920’s to generate revenues of £10’s of millions a year from customers to whom they initially sold at breakeven or a slight loss; Credit cards offer interest-free balance transfers as an inducement to switch; Printer manufacturers virtually give away their inkjet printers and make their money on the expensive ink cartridges you’ll be buying for the next few years. Tetra Pak make € billions a year supplying reels of their packaging materials to thousands of packaging companies who use their machinery to make over 100 billion cartons a year … and I can give you many more examples.

I know a highly regarded firm of accountants who were offering a strategic planning day with one of their partners free of charge. At the end of the day they suggested that if the day had been valuable you should just pay them what you thought it was worth. Most people put a value on the day of around £1,500, which they paid. But  more significantly, every time they ran one of those days they picked up an average of £10K in extra business, most of which continued for years to come.

Being accountants, there were some partners who just couldn’t comprehend why they should offer anything for free … and of course those partners missed out big time. Ironically, even when the results were there for all to see, they still couldn’t see that they were losing out!

So what would it be worth to your business if you added 10, 100 or 1,000 more customers this month and every month, if you didn’t make a penny on the initial transaction, but made enormous profits on all the repeat business you did with them over the months and years to come?

If the numbers stack up for you, your first step in using this strategy should be to identify and understand just how much combined profit a customer represents to you for the life of their business relationship with you. This will tell you how much time, effort and investment you can afford to invest upfront in acquiring each customer … and whether or to what extent you can afford to make all of your profits on the repeat business.

Here are two FREE ways to discover the RIGHT marketing strategies to supercharge your business growth and build the business of your dreams:

Register here to attend my 60 minute FREE webinar: “10 Essential Questions That Will Transform Your Business Overnight.” None of the hundreds of business owners I’ve worked with could answer these questions … and it was keeping their businesses from growing.”

Click here to start your FREE STEPPING STONES MARKETING MASTERCLASS: Join hundreds of other business owners who now see possibilities in their business that they were blind to before and describe this 14-day masterclass as a “complete game changer.” Save years of frustration, as you discover key marketing principles that will ensure a consistent stream of high-quality leads into your business. Accelerate past the immensely frustrating trial and error stage as you discover which marketing activities will have the biggest impact on your growth (If you lack this information, getting it right can take years longer than most people expect). Discover the RIGHT order in which to implement them (and yes there IS a right order) and how combining them in the right way will give you the momentum you need to achieve the business results you always wanted. For 24 years Robert Clay has helped business after business skip the immensely frustrating trial and error stage and figure out the answers they need to unlock their hidden potential; supercharge their business growth; become leaders in their niche; win major national awards; and build the business of their dreams. MEET ROBERT in this video and learn more about his journey from automotive innovator to business transformer. 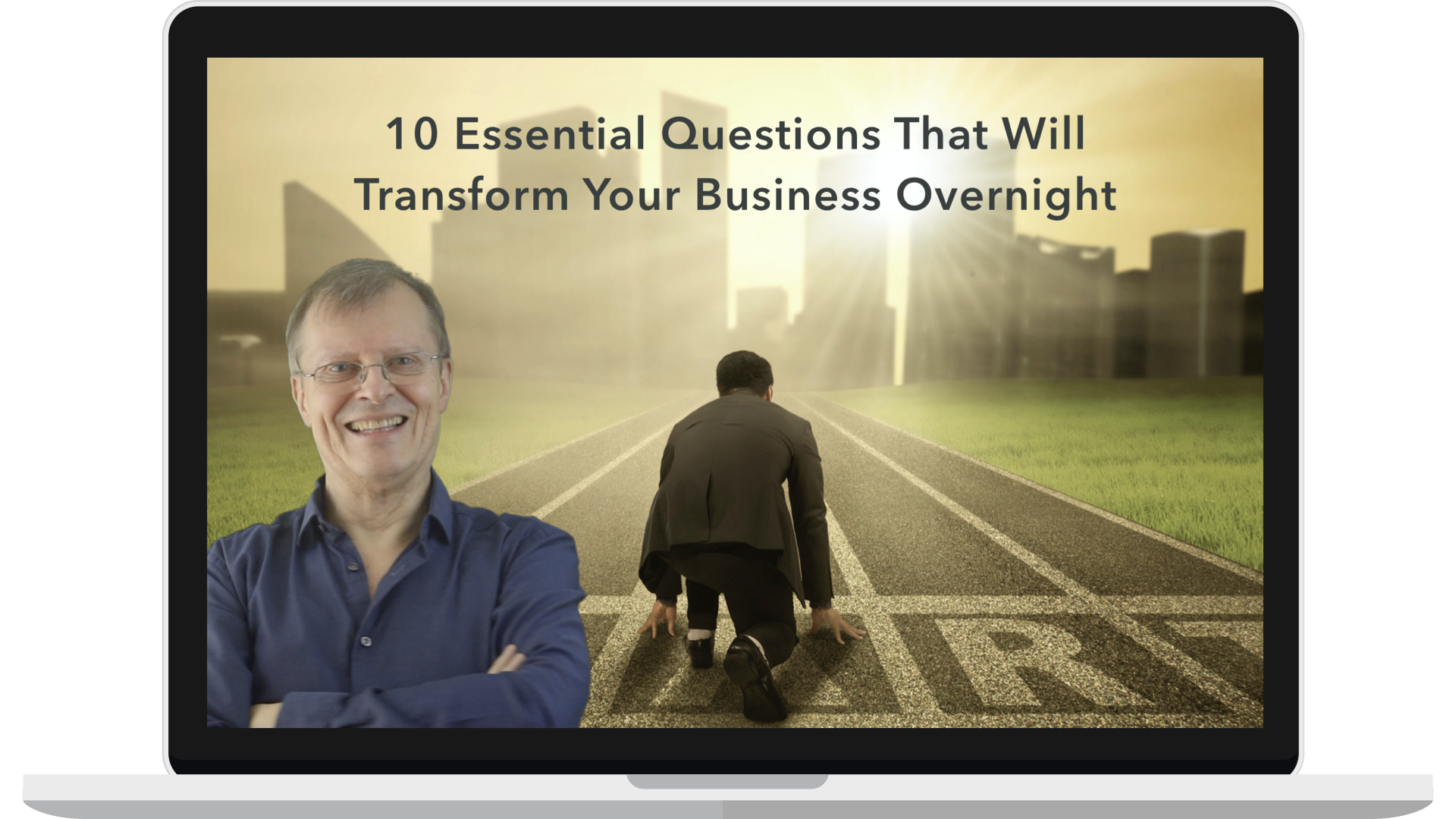 “10 Essential Questions That Will Transform Your Business Overnight”

None of the hundreds of business owners I’ve worked with could answer these questions … and it was keeping their businesses from growing.” On this FREE webinar you’ll learn:

Reserve your seat now for FREE 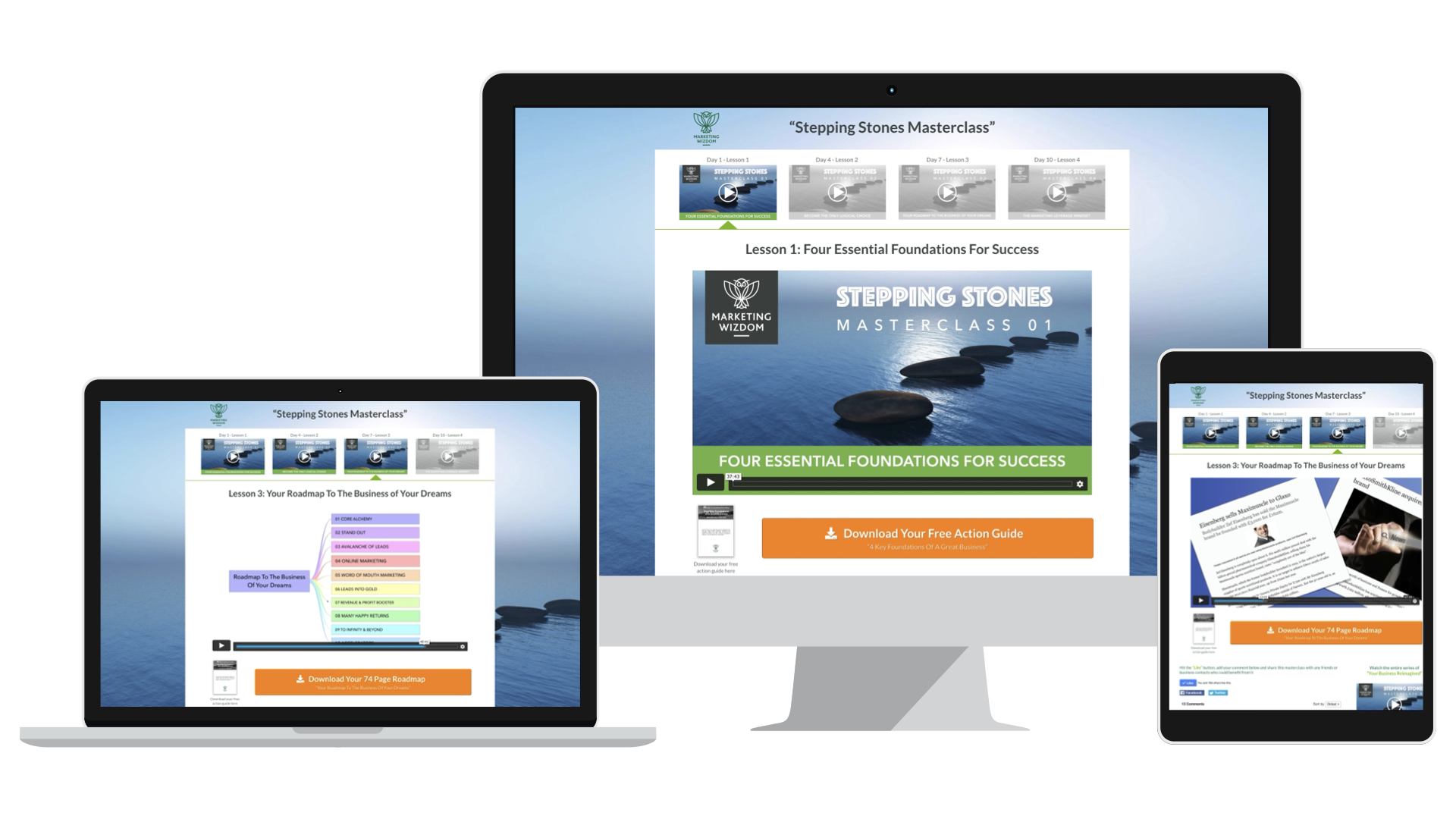 “Skip the trial and error stage that holds most businesses back. Focus only on the marketing activities that’ll have the biggest impact on your business”

​Join hundreds of other business owners who now see possibilities in their business that they were blind to before and describe the Stepping Stones masterclass as a “complete game changer.” ​

N.B. This is a FREE service. No credit card is required.